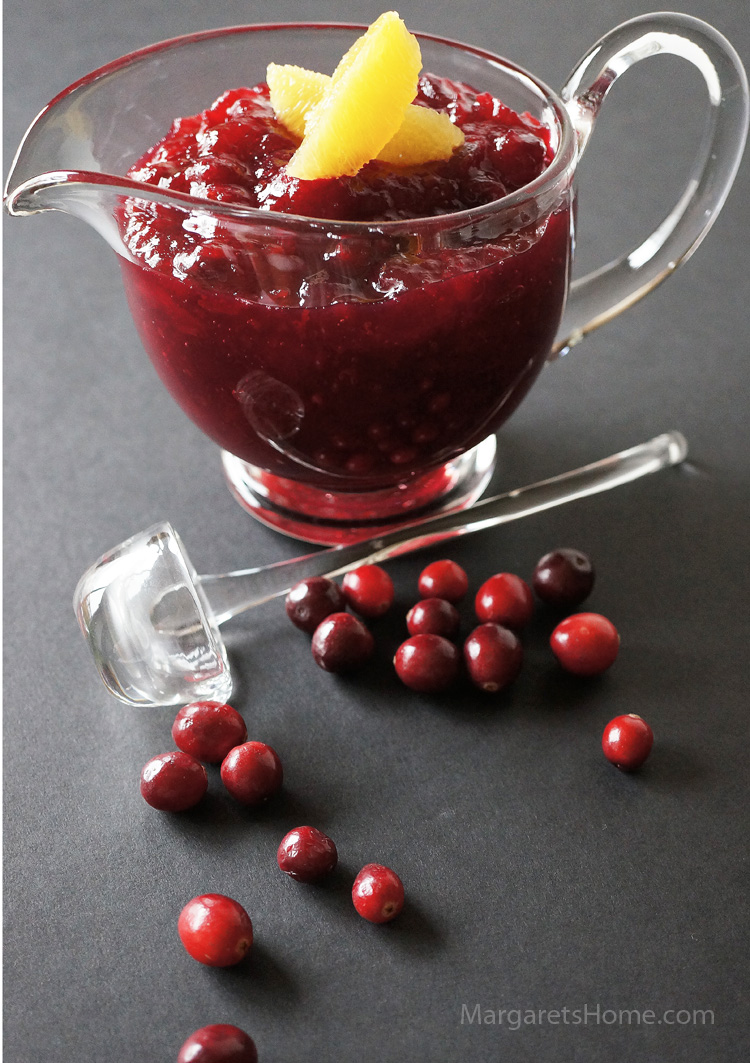 Happy Thanksgiving to all my readers and my Facebook friends. Here is a recipe for cranberry sauce that I make for my family Thanksgiving dinner. This recipe is so easy and delicious that you will never buy another can of cranberry sauce again! It has an Indian spin to it, in that, I add a little dry chilli flakes while cooking the cranberries, but it is totally optional. You can add it if you like. This recipe can be make in advance. Just heat it up and serve.

The recipe is very basic and you can make it your own by adding ingredients, such as, chopped Granny Smith apple, slivered almonds, pecans, ginger, cinnamon, nutmeg, and allspice. Instead of sugar you can use maple syrup and instead of orange juice you can use cranberry juice. So, once you have the basic recipe, you can dress it up with ingredients that you like.

Enjoy the tangy, sweet, and spicy taste of this super easy cranberry sauce at your thanksgiving table this year.

In a small saucepan bring water to a simmer. Add sugar, fresh cranberries, orange juice, chilli flakes, and zest. Stir until the sugar dissolves and the cranberries begin to pop. It will take about 10-12 minutes.

Remove, dish out into a beautiful bowl, garnish with orange segments, and serve. 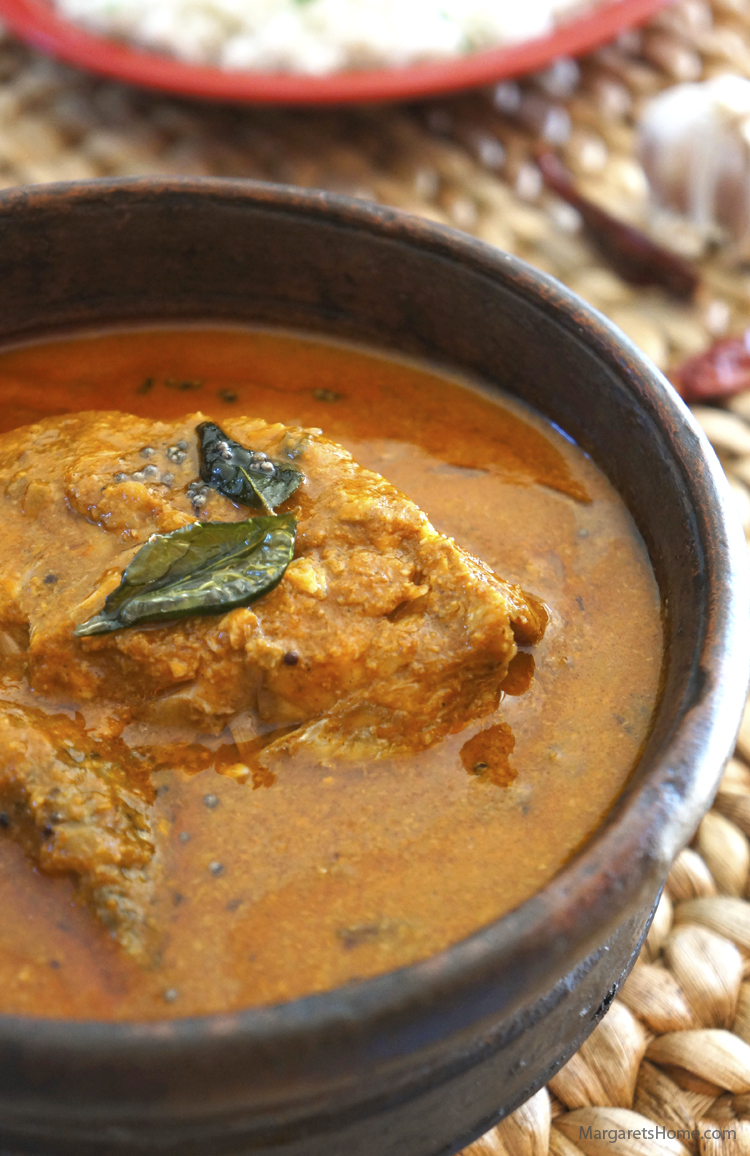 Today’s recipe is one that I learned from one of my Mangalorean friends while I was in Manipal. I found a lot of similarities in the way we both prepared this dish. Both of us used coconut, curry leaves, garlic, and chillies. So, I shared my recipes from Kerala with her in exchange for her Mangalorean recipes. This fish curry uses tamarind as a souring agent. I added an extra seasoning of two teaspoons of oil, mustard seeds, and curry leaves before I took the above picture, but that is optional.

All you need is a pot of steamed rice to relish this fish curry. I hope you will enjoy it as much as I did.

Using a paper towel, pat the slices of fish until dry. Rub a little salt and turmeric powder over them and marinate them in the refrigerator for 10 minutes.

In a small pan, over medium-low heat, roast the chillies, coriander, cumin, peppercorn, and fenugreek seeds until fragrant. Cool completely. Add all the roasted ingredients, half of the chopped onion, garlic, and half cup of water to a blender and grind to a fine paste.

Place a large saucepan over medium-high heat. Add oil, and when it shimmers, add the mustard seeds. When the mustard seeds splutter, add the curry leaves, and the rest of the chopped onion. Sauté until onion is lightly brown. Add the ground paste and cook until the oil separates. Add the coconut milk, tamarind extract, half cup water, salt, and fish slices. Stir gently, cover with a lid, and cook over medium heat for 15 minutes or until the fish is cooked. Garnish with curry leaves. Serve with steaming hot rice. 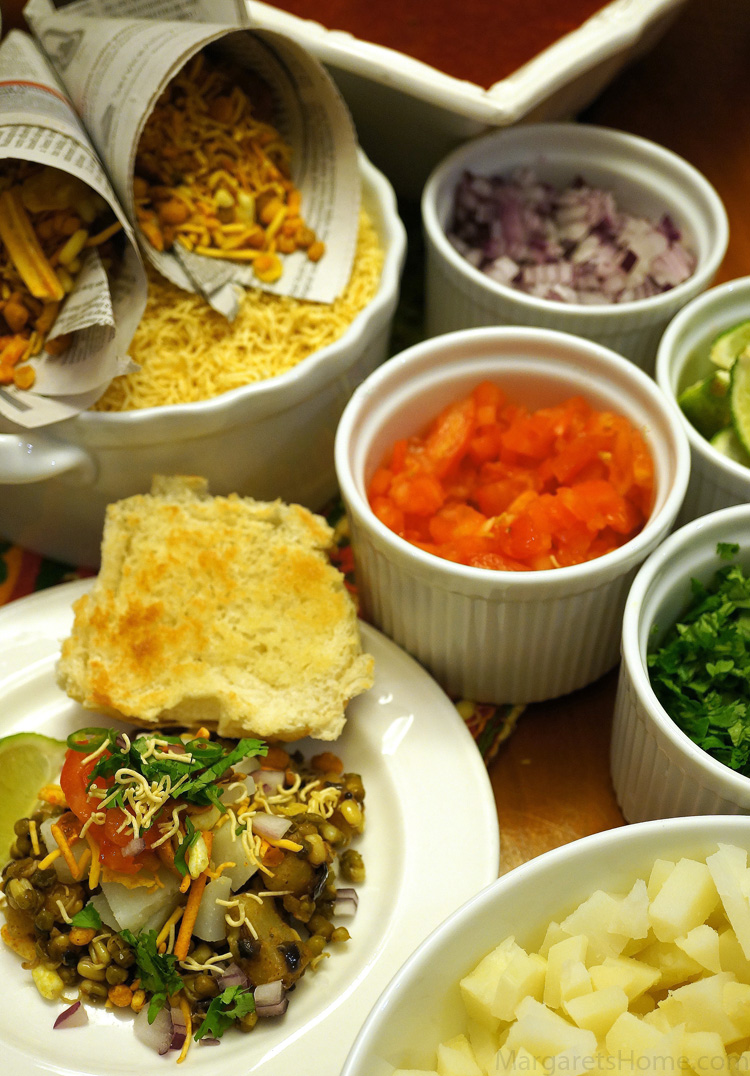 I grew up in Pune, a city close to Mumbai in the state of Maharashtra. Many of the dishes my mom prepared were influenced by our neighbors and friends. Needless to say, Maharashtrian cuisine is one of my indulgences.

Recently I was invited to a birthday lunch and misal was served as an appetizer. The sight, smell and taste of my days in Pune came flooding back. I shamelessly ate the appetizer as my main course, to the amusement of all the other guests. It made my day and I decided to do a blog post for others that might miss misal as much as I did.

I must confess that my misal recipe is unconventional. I know people from Maharashtra have their own authentic recipes, but I had to make do with whatever ingredients I had available. I used sprouted green gram (moong beans) because I did not have moth beans (matki). You can also make misal using a combination of legumes like sprouted green gram, moth beans, black eyed peas, and dried white peas. I made this misal recipe for a party of 15 people and everyone enjoyed it. The recipe looks long with the number of ingredients, but it’s not that difficult to make.

Cook the sprouted green gram in a pressure cooker with one cup of water. I cooked it without the weight for five minutes. Set aside.

Heat oil in a large sauce pan, over medium-high heat, until it shimmers. Add mustard and cumin seeds. When the mustard seeds splutter, add asafoetida, turmeric, and curry leaves. Fry for five seconds and then add the chopped onion and cook until the onions turn translucent. Add the garlic and sauté until the onion turns light brown. Garlic should not turn brown. Add Goda masala and sauté for a minute longer. Add the sprouts, potato, salt and any water left from pressure cooking the sprouts. Mix well and cook for five minutes or until the water evaporates. Garnish with chopped cilantro.

Mix the two packets of Rasoi Magic Misal Rassa with two cups of water and set aside.

In a large pot heat three tablespoons of oil over medium heat. Add the ground onion, garlic and coconut paste. Fry until it turns light brown. Add the chopped tomatoes. Cook until the oil separates and then add salt, the Rasoi Magic Misal Rassa mixture, and eight cups of water. Bring to a boil and then turn heat to low and let it simmer for ten minutes.

To season the kat, take a small non-stick pan and add the rest of the oil. Place over low heat. When the oil gets warm turn off the stove and add one teaspoon of Kashmiri chilli powder. Pour this over the kat. It will float over the kat and give it a beautiful red color.

To serve – put 2 tablespoons of usal in a small bowl, add a few cubed potatoes, two tablespoons of the hot mix, stir the kat, and pour two-three tablespoon over it. Then sprinkle sev, onion, tomatoes, cilantro and green chillies. Serve a lemon wedge and pav on the side. You could also cut the pav in half, butter and toast them on a griddle before serving. Misal a complete light meal any time of the day, a great tea time snack, and a showstopper at a party!

Notes:
– The quantity given for this recipe serves 15-20 people.
– Assemble the misal just before serving.
– Goda masala is available at Indian grocery stores. If you cannot get this masala you can use Kanda-Lasoon masala.
– Kat can be made by following the directions on the misal rassa packet.
– To sprout green gram, I soaked it in water for six hours. Drained it in a colander and put it in the oven with the light on overnight. I had beautiful sprouts the next morning.
– The picture at the bottom of the page was taken by a friend at the party. 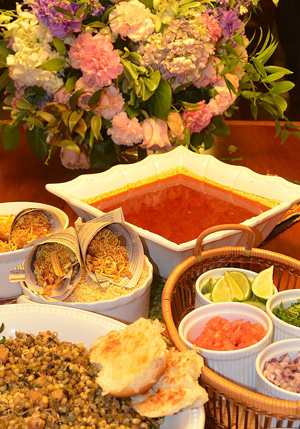 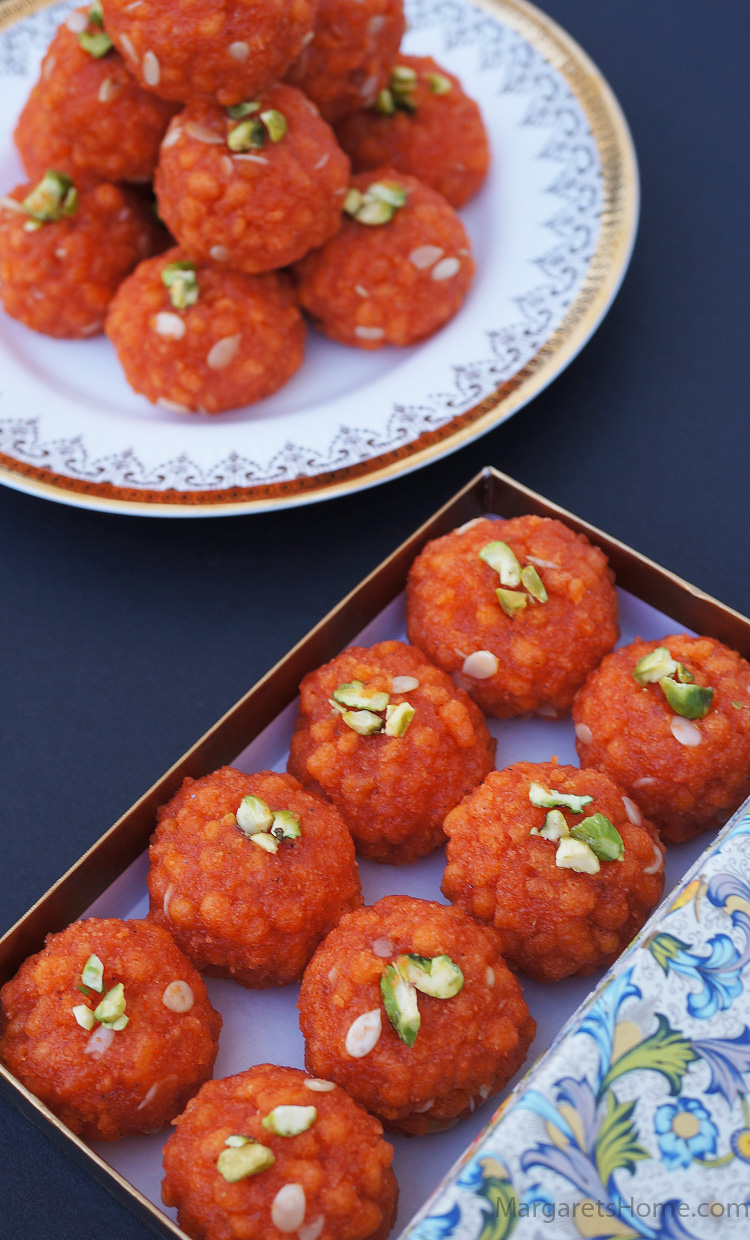 Happy Diwali to my readers and friends who celebrate the Indian Festival of Lights. May the new year bring you and your family prosperity, good health, and happiness.

When I walked into my local Indian grocery store the shelves were full of Indian sweets. My mouth was watering and memories of my time in India flooded my mind. I remember oil lamps on the porch of almost every home, firecrackers lighting the skies, children dressed is new outfits, neighbors sharing sweets with each other, and the aroma of wonderful sweets being prepared wafting in the air. Right then I decided to make boondi ladoos and bought all the ingredients I needed and headed for my kitchen.

Boondi ladoos are not the easiest to make but if you have patience, pay close attention to the measurements of the ingredients, read the instructions and notes carefully, you too can make boondi ladoos that you can enjoy and share with your friends. You will also need a boondi maker (to make the small balls, which are called boondi in Hindi, that collectively make each ladoo) or a skimmer – a flat ladle with holes in it to make the boondi. The Indian grocery stores in the U.S. carry it. I added a twist to the fragrance and taste of these boondi ladoos with orange blossom water and red rose water. I hope you will enjoy my version of boondi ladoo.

Sift gram flour, baking soda, salt and food color into a large bowl. Add half the water and mix with a wooden spoon. Add the rest of the water a little at a time and stir until the batter is smooth. The batter is the right consistency when it drops through the holes of the skimmer easily. Let the batter rest while you make the syrup.

In a large pan combine sugar and water and boil for 15 minutes over medium heat. Brush the sides of the pan with water as it is boiling, so that the sugar does not crystallize and use a candy thermometer. The syrup is ready when the thermometer reads 220 F. Another way to check whether the syrup is ready, if you don’t have a candy thermometer, is when you touch a drop of cooled syrup between your forefinger and thumb, a thin string is formed. Turn off the heat. Add food color, orange blossom water, rose water, and cardamom powder. Add the melon seeds and stir well.

Heat oil in a wok to 350 F. Pour a small amount of batter on the skimmer and tiny droplets of the batter will fall through the holes in the skimmer, into the oil, and form boondis. Hold the skimmer about two inches from the oil to form round boondis. Of course, you need to be careful when you do this. As soon as the bubbles stop forming around the boondis (the boondis should not be crisp and turn brown) drain the oil with a slotted ladle and put them into the syrup. Stir them every time you put a new batch of boondis into the syrup.

Mix until all the boondi and melon seeds are well coated with syrup. When the mixture is cool enough to handle make ladoos. Garnish with chopped pistachios.

Notes:
– If the batter is too thick the boondi will be flat. Add a few drops of water at a time to get the batter to the right consistency so the boondis will be round.
– Hold the skimmer about two inches from the oil, otherwise your boondi will have tails.
– You will see black specks on the ladoos if you add cardamom powder. So you can avoid that by just using the orange blossom water and red rose water.
– Start making the ladoos as soon as possible. If you let the mixture get cold you will not be able to form ladoos.
– You can also put the boondi and syrup mixture into the bowl of a stand mixer with a paddle and run it for about five minutes. If the mixture does not come together to form a ball, add 5-6 tablespoon of boiling hot water, while the mixer is on and run it for another five minutes. 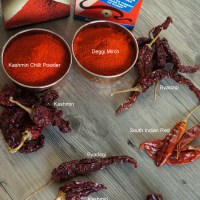 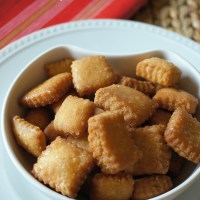 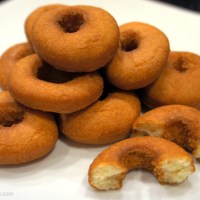 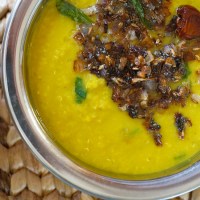 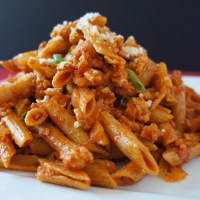 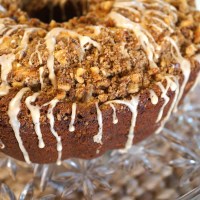 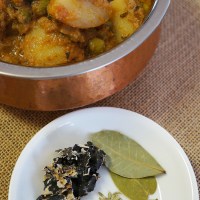 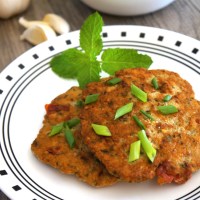 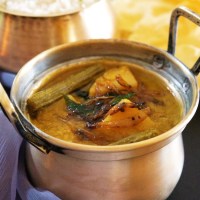 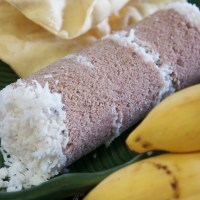 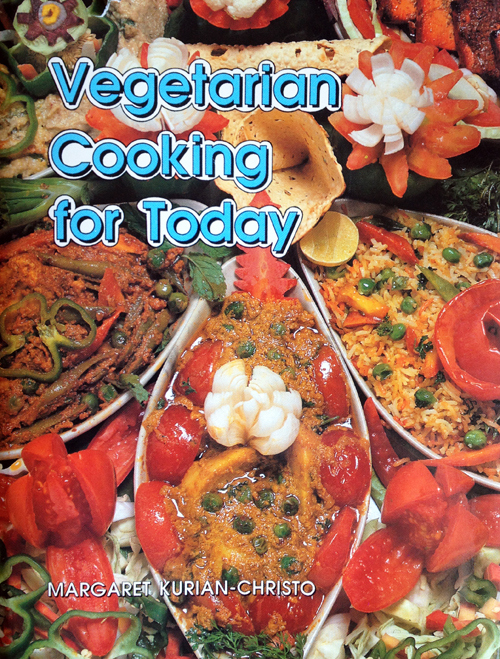